Look at how well she's sitting up! 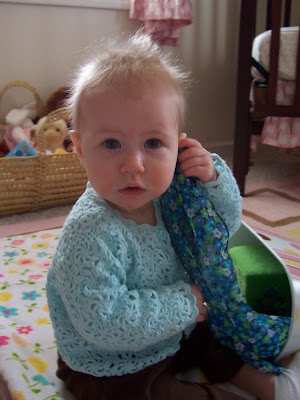 Cadie and I did our first professional photo shoot last week. (I don't mean we were models - although I think Cadie could be - the photographer was the pro, not us.) Take a look by clicking here.
Posted by Mo at 7:00 PM 4 comments:

Now that it's Friday evening, I'm thinking back over the week and feeling a little jumpy. There were two big things that happened this week - one good, one bad. The bad thing was that I backed into the garage door when I was leaving for work on Tuesday morning. I busted it up bad and it sounds like it's going to be pricey to fix.

The good thing is Cadie's first tooth is in! I found it Tuesday night. She's chewing on everything pretty hard now. I think I'll buy her some teething biscuits at the store tomorrow.

I start my "new" job on Monday. It's not really new, I'll still be a youth services librarian and my paycheck will come from the same place, but I'll be in a different library much closer to home. I'm looking forward to a little more time with Cadie.
Posted by Mo at 8:22 PM 1 comment:

It's really looking like any day now. She gets up on her hands and knees, revs back and forth, and has started picking up one hand and one leg. She just can't figure out how to get exactly where she wants to go. She tends to go backwards. I wish we could figure out to post videos, because that would show her method better, but I do have some nice pictures. 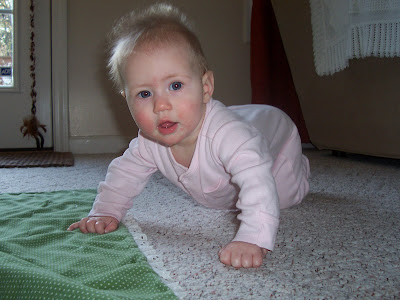 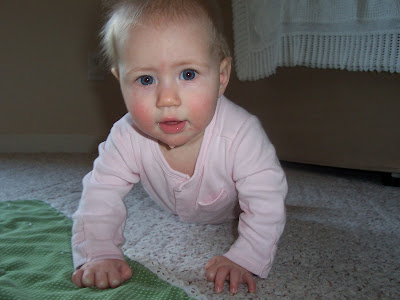 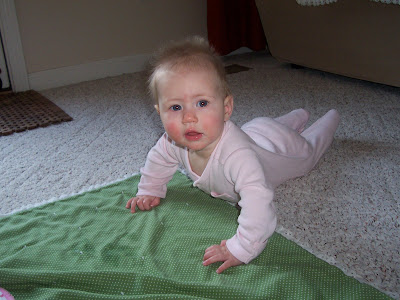 She started out with her body in the center of the green blanket. As you can see, she got herself off of it in a hurry.

She continues to exhibit symptoms of teething - lots of drool and everything she can get her hands on goes in her mouth. She seems to be trying to grow some curly hair. It just sticks up kinda crazy right now and even with lots of brushing it won't stay down.
Posted by Mo at 9:38 PM 2 comments:

I don't think I mentioned it here, but we had a big weekend here. Matt was ordained (he's a Baptist minister for real now, and that makes me a real minister's wife) and we also did a parent/child dedication with Cadence. Lots of extended family was in, and we hosted two big meals at our house. It was really great to see how supportive our family and, more importantly, our church was for us at this time.

Cadence had 5 of her great grandparents visiting. After everyone left on Sunday afternoon we all crashed, but Cadie looked really cute doing it. 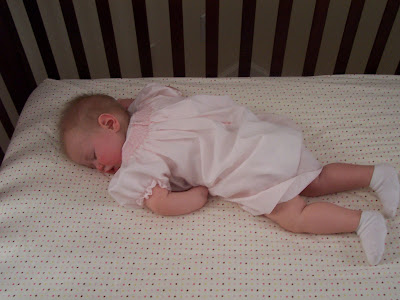 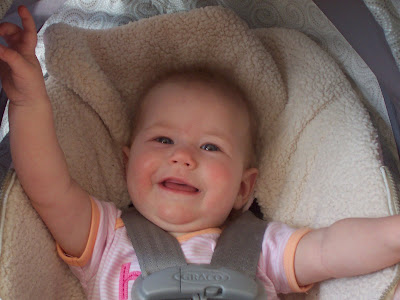 Thinking about babies and body image

Week before last I got to go to the Mommy and Me group at the hospital. The topic was dealing with criticism, and one of the moms mentioned how she had to tell her parents that she would not tolerate any negative comments, no matter how innocent, about her daughter's body. Interestingly, this started a pretty fierce conversation among the moms about what our babies (particularly the girls) would have to deal with to accept their bodies and live healthfully. And none of these kids are even 6 months old.

There were a lot of things I never thought about dealing with before I became a mother, and this is one of them. Until this conversation, I just thought Matt and I were doing good to love Cadence as she is, which is pretty petite, with chubby thighs, and fuzzy hair - a very cute look for a baby. But what about when she's 5 or 10 or 15? Will boys tease her? Will she think the other girls are prettier? Will she be tempted to diet or worse? Can our acceptance of her overcome the pressures of the media, her friends, or people who make seemingly innocent comments at church or school?

Last week was the 50th anniversary of the Barbie doll. I happened to hear a radio show with a panel discussing Barbie's impact on society. It's probably obvious that many feminists are not Barbie fans because of the unreal standard of beauty she represents. Apparently, girls are ambivalent about Barbie too - there's been several studies done of the violence girls do to their Barbies. A lot of girls harm their Barbie dolls, and psychologists think this is a way for girls to take out their frustrations about the type of femininity that she represents.

So I was thinking. Does Cadence get Barbies? I loved my Barbies. I was not a girl who harmed mine - possibly because I think I bought most of mine with hard-saved allowance money. I played with Barbies and I turned out okay, right? Well...maybe not. As a teenager, and even well into college, I was ashamed to wear a swimsuit in public and I was convinced that I was overweight. I had a friend who actually said I was fat and two other friends (one guy, one girl, on two separate occasions) who suggested I needed to work out regularly to slim down. But I look back at pictures from that time in my life and I am tiny! The biggest clothing I was wearing couldn't have been more than a size 7!

It's not fair to blame Barbie for body image problems that are perpetuated by everything from Disney movies to magazine covers to your favorite sitcom. But did my affection for Barbie and the perfection she represents contribute to my distorted views later? I don't know. I know my family was never negative about how I looked and my exposure to negative media was fairly limited.

I finally asked Matt today what he thought about Cadie and Barbies. He said there's probably better things we could spend our money on, but we're not going to freak out if someone gives her one. Or if she plays with them at a friend's house.

I know there's a case with a few of my favorite Barbies and their best outfits waiting for her at my parent's house. My mom made me save a few when I was teenager and wanted to sell them in a garage sale. I think someday we'll get them out, admire their dresses, and have a talk about what makes a woman really beautiful.
Posted by Mo at 9:56 PM 4 comments:

It's a snowy day

We got several inches of snow last night. I go in to work late on Mondays and I'm still not sure if I'm going or not. But who's worried about that when there's cute pictures of Cadence to look at? These were taken yesterday. 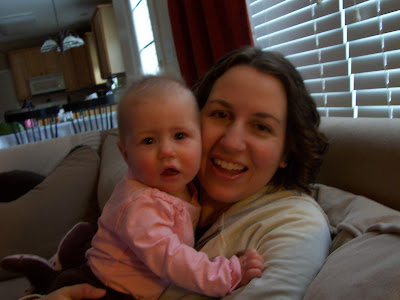 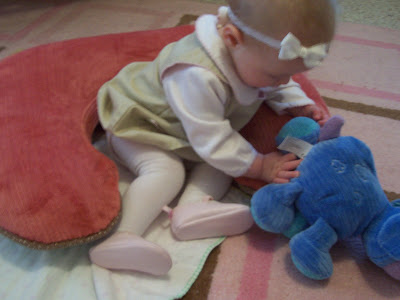 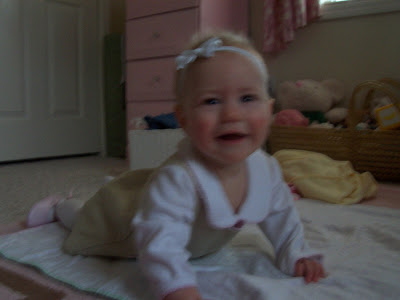