I didn't have the most accomplished day at work on Tuesday, so I felt like I should accomplish something at home. Boy, did I. 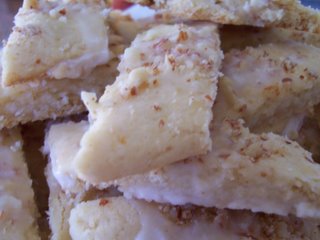 Looks good, doesn't it? Yummy almond bars. I got the recipe from here.
Posted by Mo at 6:31 PM 1 comment:

I had a flashback to my 80s childhood today. At church, I noticed a nice smell (probably someone's perfume or lotion) that reminded me of something. After a minute, I realized that the smell was exactly like the scent of one of my charmkins. Charmkins!

Charmkins were really great little tiny scented dolls that I loved. They were maybe an inch tall and they all had flower or plant themes and names. Each Charmkin came with some wearable item to be displayed from, like a necklace or a barrette. I really hope my mom still has my collection because they were so great. I wish I had them right now to look at.

Anyway, I think this is going to be something I collect. I imagine they are hard to find, but I am going to start checking thrift stores and garage sales when I have opportunity. It's so nice to think back to the fun times I had playing with them.
Posted by Mo at 2:24 PM 1 comment: 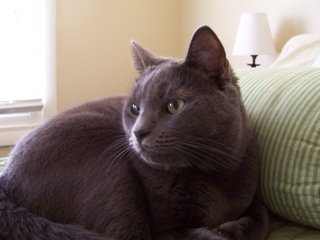 We're still nice 'n' busy around here. We did manage to hit the all-you-can-eat pancakes for $.99 restaurant this morning. (While there, we discussed our desire to move out of the country. Not out of the United States (that would give Matt's mom a heart attack, I think), but out of the we-drive-an-hour-to-Target-and-a-half-hour-to-Walmart-and-sometimes-we-get-stuck-behind-tractors country. However, only in the country can you get all-you-can-eat pancakes for $.99. And they are really good pancakes.) We also hit a thrift store and got a Weslo Cardio Glide in great condition for only $10. They are going on ebay for over $50 plus shipping. Anyway, the plan is to use it while watching TV because we no longer get any exercise.

(Just a note, I love parentheses and parenthetical comments.)

Then we split up. Matt to school to rehearse until late tonight. Me to one of the libraries for a paper airplanes and rockets program. I was dreading my program (and Matt has really been dreading the musical. He used the word "failure." Please remember to pray for him.) I thought I was wasting my time even planning it because no one would come and the books I wanted to promote wouldn't check out. But actually, I had a great group that was just the right size - if it was bigger there really wouldn't have been enough room. The parents that were there were really supportive and the kids had a fantastic time. Alka seltzer rockets are great and so easy! Here's how to make your own:
1. Get a clear film canister.
2. Fill it halfway with water.
3. Drop in a quarter of an alka seltzer tablet
4. Snap the lid on tight.
5. Set it lid side down on a hard outside surface. Can shoot anywhere from 4 to 15 feet, I'd say.
The paper airplanes were a big hit too.

Now I will make egg salad. Which I really like on a sandwich. Which is strange, I think, because I didn't eat egg salad until I tried out the recipe I use now about a year ago. Of course, I love just about anything with mayo and onion, so maybe it's not so weird.
Posted by Mo at 4:26 PM 1 comment:

There is the loveliest breeze in my office today.

That's what a happy first-grader said to me as she was leaving the elementary school media center I visited today. (I'm sure there's a better way of phrasing that, but I don't know what it is.) I feel a comment like that justifies bragging on myself.

Especially since it's almost 3:00 and I'm eating lunch. So I've obviously had a busy day - because I just DON'T put off lunch. Matt won't be home until around 9:00 tonight after rehearsal and meetings. But this weekend was nice. I took Friday off work to do things like laundry and grocery shopping and preparation of a real meal. Saturday and Sunday were very relaxing, even though we did do a lot of chores. We also went out to eat twice and had friends over.