This is shameful. I haven't posted since last Tuesday?! I guess it goes without saying that I (and Matt too) have had a very busy weekend and week before that.

Anyway, Tuesday in London was cool. We started the day with a quest for cheap theater tickets. The hitch is cheap tickets to a show you actually want to see. We really wanted to see Wicked and we did manage to find discounted tickets. Then we went to the British Museum, where we saw the Rosetta Stone and a bunch of other neat old stuff that is, well, not British, making the name of the place kind of illogical. You couldn't call it the "Stuff we took from other countries when we were occupying them" Museum. If I remember correctly, there's some debate about giving certain items in the British Museum back to the countries of origin, which I'm not sure about, because the British Museum obviously is taking really good care of everything and letting people in for free to enjoy history. 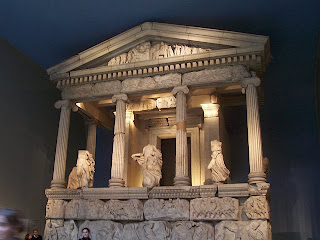 And a horse sculpture that was shockingly realistic (the horse is on the left, that's Matt on the right): 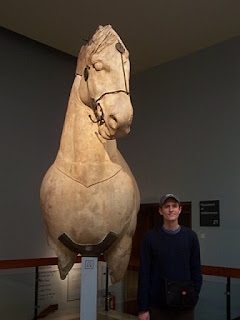 And a room that used to be a library: 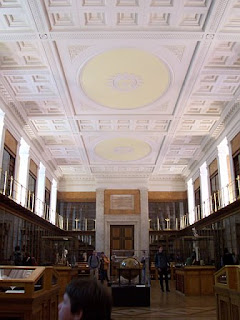 I have to admit that I'm a little fuzzy on what we did for the rest of the afternoon after leaving the library. We tried to go to a lunchtime concert at St. Martins-in-the-fields (which is so not in the fields), but they're undergoing construction and not hosting concerts. Then we got rained on. Then we ate lunch at this diner in what appeared to be the business district - it was really cute in a dive-y kind of way, and we had a very flustered and sweet older waitress. Then I don't know what we did, maybe napped? We ate thai food for dinner, I remember. They put potatoes in my curry.

Wicked was great. I would recommend it. A fun and powerful show about standing up for what's right, the dangers of mob mentality, and true friendship. It was also fun to ride the bus back to our hotel after the show and see the city at night.
Posted by Mo at 1:04 PM No comments:

I have got to say that it's a very nice break in my day to look at London pictures during lunch. One of our favorite parts of London was visiting The Tower of London, which was includes old royal residences, the Crown Jewels, and well, prison cells and execution sites. Quality history, people. 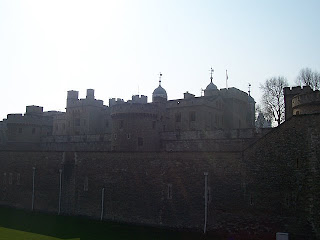 Tower Wall - nice to look at while you wait to buy expensive tickets. 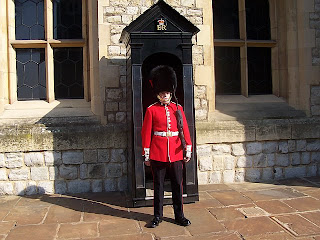 This guy was outside the crown jewels. 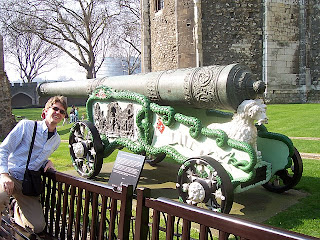 Matt was really into the military stuff here. There are several more pictures of various old guns, swords, and armor that I will spare my viewers. 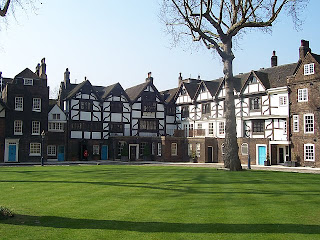 This section of the tower was once occupied by the queen, in fact, I think the guards still call it "The Queen's House." 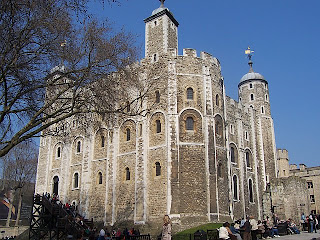 The White Tower - construction on this started in the 1100s. Yeah. 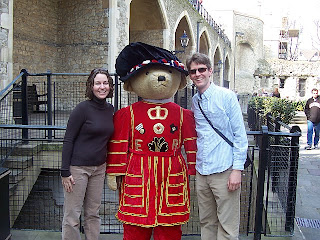 We made friends with one of the guards! He was furry! 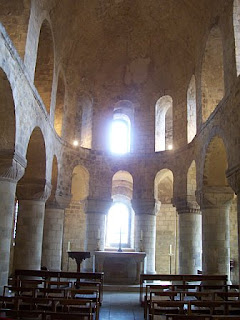 I was taken with this beautifully simple chapel in the White tower. 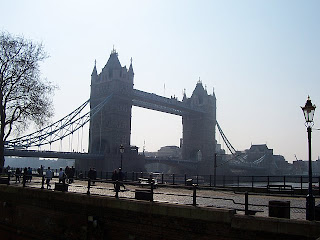 After spending a good part of the day at the Tower, we crossed this - the Tower Bridge to explore neighborhoods on the other side of the Thames. We went to a pub for lunch and saw the recreation of Shakepeare's Globe Theater. 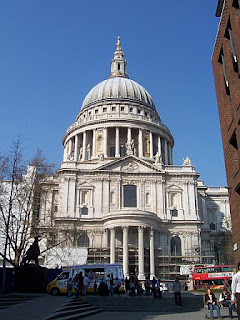 Then, here, St. Paul's Cathedral. Quite nice, but we kind of had to rush because we wanted to... 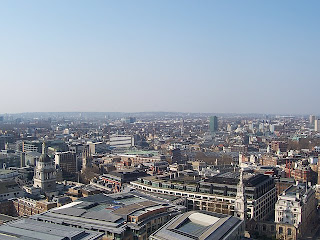 You'd think we'd be tired after all that, and we were, but we weren't done yet. We went back across the river to visit the
Tate Modern art musuem. After that, there was an ill conceived search all over what was apparently the legal district for a historic pub, with Matt constantly assuring me it was just down the block or right around the corner. In the end, the pub was found and diet coke was procured, but I must offer a warning - beware the travel book map.
Posted by Mo at 1:07 PM 1 comment:

Something to make my day...

This morning, one of my storytime moms told me that her daughter prays for me every night when they say their prayers together. Wow. 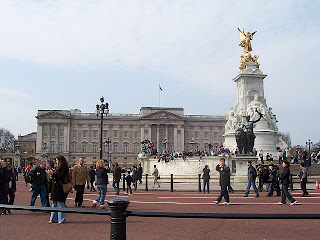 Buckingham Palace - there were tons of people here, for no reason we could see, as there wasn't anything particularly interesting happening 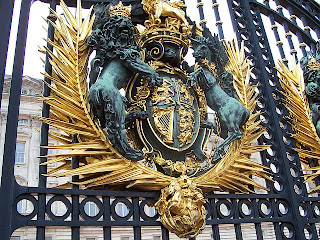 Buckingham Palace gate - it's not too over the top, right? 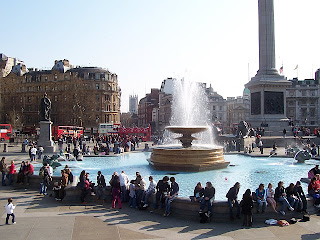 Trafalgar Square, we came here after we were able to check into the hotel 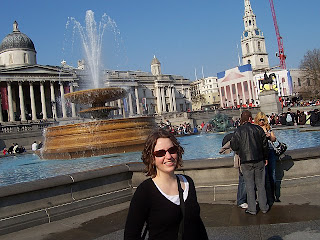 That's me at Trafalgar Square, which was also crowded. We hit the National Art Gallery in the background after we took this pic.
Posted by Mo at 12:54 PM 1 comment: 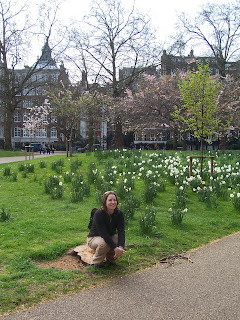 Me in St. James Park 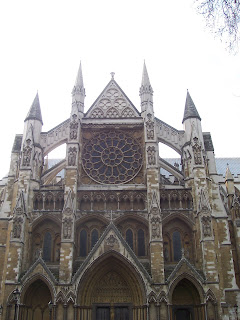 P.S. Believe it or not, it's snowing here tonight.
Posted by Mo at 7:46 PM No comments:

back in the usa

Wow. What a weird week this has been. While Matt and I were running errands this morning (garbage dump, coffee, post office, grocery store), I pointed out, "On Monday, we were in Paris." It was a little hard for us to jump straight back to work on Tuesday and go full steam until yesterday evening after work. Now we're both suffering sinus infections or colds or something.

But we had an awesome trip! I was scared about doing this all on our own, no group or tour guide, but that made an adventure of figuring out what we were doing, where we were going, and what we were eating (v. important to me!) I'm going to spend the next week or so sharing pictures here, and here's the first: 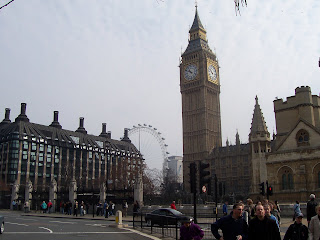 A view of Big Ben and the London Eye on our first day in London.
Posted by Mo at 1:52 PM No comments: