we're buying a house. The seller accepted our offer and soon it will be all ours! (Assuming everything goes according to plan, of course.)
Posted by Mo at 9:32 AM 3 comments:

We made an offer on a house!

Pray the seller takes it!
Posted by Mo at 8:58 AM No comments:

You asked for it; you got it - tons of pics from our trip to VA

Warning: this posts contains very many pictures. It may just make you want to plan a vacation in Virginia too (it's for lovers, after all.) 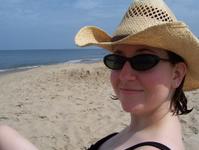 Yes, I am pale, but happy to be soaking up the sun! (With my SPF 30 applied liberally.) 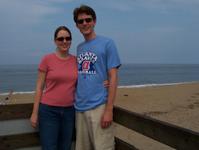 I guess this one is self-explanatory. If it's not, well, this is Matt and me on the beach. 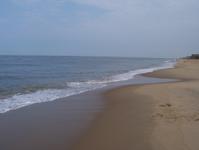 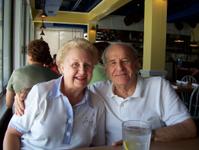 Nana and Dado were very gracious hosts. Someday we'll discusse how Nana is a food-pusher. Aren't they cute? 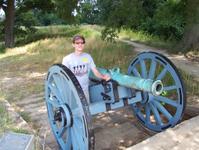 We visited Yorktown, where the battle that pretty much won the Revolutionary War was fought. Matt poses with a canon. 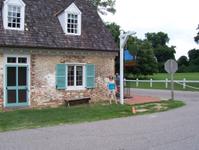 The restaurant where we ate lunch was built in the early 1700s. They had really good carrot cake. 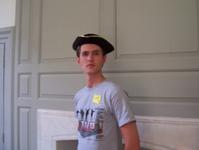 Matt pretends to be colonial. 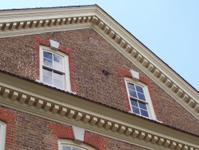 If you look carefully between the windows on this house, you'll see a Revolutionary War canon ball! This is the home of Thomas Nelson, the third governor of Virginia and a true patriot. He told troops to fire on his own mansion because he suspected British officers were using it. He also gave almost all his money to help fight the war and then died a pauper. His grave was unmarked until recently. 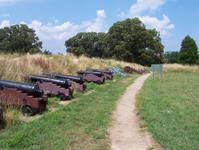 The battlefield is still a lot like how it was during the Revolution. These aren't the original canons, but they are period. We could really picture George Washington, Lafayette, and Alexander Hamilton fighting here. 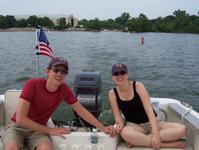 My Uncle Rick and Aunt Pami were kind enough to take time off work and take us out on their boat - down the Potomac River past Mount Vernon and Fort Belvoir, and into D.C. We stopped for lunch in Old Town Alexandria. 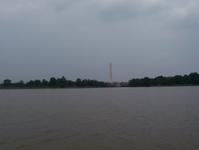 Just to prove we really were there, on the Potomac River, here's a shot of the Washington Monument. 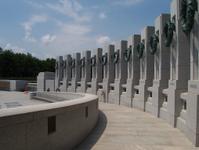 Later in the week, we visited the WWII memorial. It's so big and moving and well-planned that our pictures don't really do it justice. 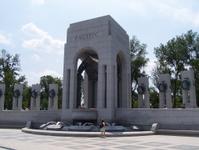 We really wanted to visit the memorial because Matt and I both had a grandfather fight in WWII. My Grandpa was in the Pacific, flying with the Black Sheep Squadron. Matt's Granddaddy was in Europe. 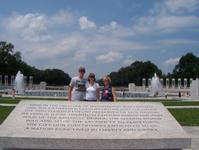 Matt, me, and my Aunt Linda at the front of the WWII memorial. We also went to the new Smithsonian Museum of the American Indian, but I didn't get any pictures there. 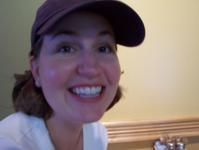 This is how I looked whenever I remembered, "Hey, I got a real job!", since I got the phone call on our way into D.C. 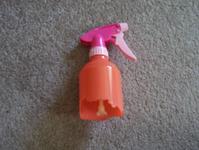 This is what we came home to. Rainey (the cat) chewed the bottom off of his disciplinary water bottle. We haven't found the bottom yet. We are now using small dollar store water pistols for disciplining Mr. Mischievious. (I won't even start on the horrible new cut on my leg from his super claws.)

1. Going to the dentist can be rather pleasant, even if they do tell you that you have a tiny cavity on your back molar.
2. You CAN get a good haircut for $12. (At least this is true here in the middle of nowhere.)
3. Jr. Smoky Cheddarburgers from Wendy's are really good, and they are only $.99!
Posted by Mo at 10:22 AM No comments:

I GOT MY DREAM JOB!

After only a year and half of looking, I finally got a full-time, salaried, professional children's librarian position that I am excited about. I start in a week.

Now, we're moving again (would you believe I have moved every summer since I was 18, if you count dorms and apartments?) because my job is an hour and 15 minutes away, but first we have to find someplace to move to.

We're at Nana and Dado's beach house now after being at my parents' house last week. So I've been meaning to update things here...

No news on the job yet. But I started a new book last week - Sorcery and Cecelia or The Enchanted Chocolate Pot: Being the Correspondence of Two Young Ladies of Quality Regarding Various Magical Scandals in London and the Country by Patricia C. Wrede and Caroline Stevermer. It's kind of like a mix between Jane Austen novels and the Harry Potter series. It's part of my ongoing effort to read children's books.

We thought my car was dying. It wouldn't have been a particularly untimely death, after all, she's got 102,000 miles and has survived a serious accident and she's almost 9 years old. The a/c stopped working last fall and parking under the trees in our yard has sullied her complexion. However, she is paid for, and really rather reliable.

On Sunday she started kinda chugging and pulsing on our way to church. Then a scary engine warning light came on. We wondering if it was the transmission or the fuel injector. We wondered if the repairs would cost more than she's worth.

Thankfully, they don't. We just got a call from the mechanic and she just needed a little tune-up.
Posted by Mo at 4:12 PM 2 comments: