Well, as expected, one of the first questions people are asking us these days is if we have a name picked out for our little girl. We do, but we are keeping it a secret for now - we want there to be a little bit of surprise when she gets here.

However, we thought it would be fun to develop a little game that would give interested family and friends the chance to guess what the name might be. So, periodically, we're giving clues that reveal one letter at a time, until August. The clues are in the form of scrambled words, that, once unscrambled, reveal a letter. Want to play? Here's the first clue:

Unscramble that word and the sixth letter will be a part of the name.

Even if nobody guesses, Matt and I had a great time coming up with this. Enjoy.
Posted by Mo at 1:54 PM 4 comments:

...and everything is growing right on schedule and looking great!
Posted by Mo at 7:56 PM 8 comments: 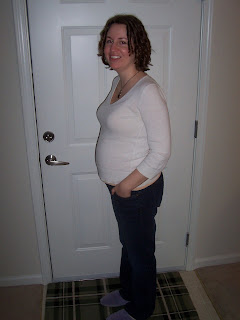 P.S. Mom and Dad, those are the maternity jeans you bought me! Thanks!
Posted by Mo at 7:49 PM 7 comments: