We loved breakfast in Paris. On our second day in Paris, we slept in and then had pan au chocolat and cafe au lait on the street. 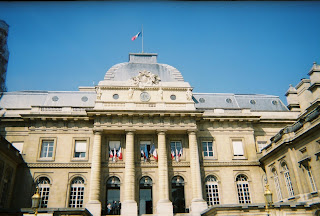 Our first stop was Saint Chapelle. It's right next to this - the Palace of Justice. There was some sort of filming going on here. An actress (playing a lawyer?) was striding out of the gates with fake newspeople trying to interview her. There were film crew people all over the sidewalk while we waited in line. 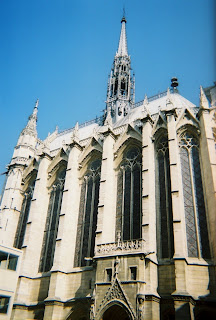 This is Saint Chapelle. 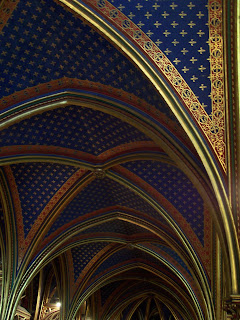 Ceiling in the lower chapel. 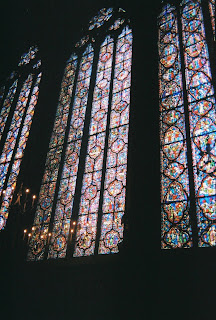 The stained glass was so beautiful, but hard to photograph. 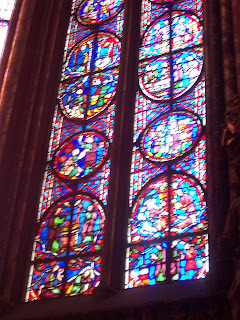 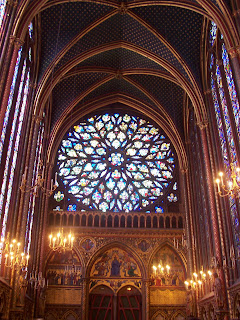 I think our guidebook decribed it as being inside a kaleidoscope. There's these jewel tones everywhere - so magnificent with the sunlight shining in. 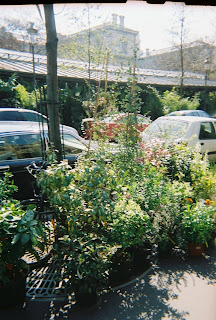 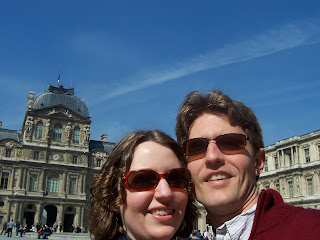 Us in front of the Lourve. Also an amazing place. There was so much to see; it was actually fairly exhausting. Of course, we saw the Mona Lisa, Winged Victory, and Matt really liked these paintings of monkeys painting. There was a recreation of an opulent royal palace suite and a ton of people.

Later that day, we went to the Montmarte neighborhood. I wanted to check out a supposedly great discount store called Tati, but it wasn't great. We were hot and the streets were crowded, so we browsed a few streets then went back to our hotel near the Lourve.

For dinner, we walked up Avenue Opera to see Harry's Bar, where Gershwin composed "An American in Paris." We ate dinner at a cafe and probably offended the waiter, who became more and more inattentive as the meal went on. People say the French are rude, but that was the only time we felt at all slighted (and we really think we did something to upset him - we're just not exactly sure what).
Posted by Mo at 9:31 PM 1 comment:

Daydreaming about our new house...

I know we have to sell our current house before I should get too excited about a new one, but I can't help it. It's on my mind this lunch hour. Maybe a list of what we'd like in our new home would be nice, huh? Here goes:

1. Clothesline. I don't know why I am fairly obsessed with this (happy childhood memories? desire to save energy?), but I really, really want one. It doesn't have to come with the house; we can put one in.
2. Garage. I'm spoiled - I don't want to scrape ice off my windshield or unload groceries in the rain.
3. Trees. A moderate amount. An I'll-know-it-when-I-see-it amount. Because, here, we've suffered the curse of the dread oak leaves. We suffer half the year for the other half to be beautifully green. Surely there's a compromise.
4. Front porch. Just a small one will do, thanks.
5. An extra space - a basement or dining room or extra bedroom - to become a music studio (that's Matt's dream), or a knitting/sewing/crafting space (that's my dream), or a library/office (we'd both like that).
6. 3rd (or 4th) bedroom. Because what we'd really like in our new home is to settle in, stay awhile, and be a family.
Posted by Mo at 1:31 PM 3 comments:

Our first day in Paris actually started out very early in London. We had to be at the train station to take the Eurostar to France at 5 AM. So we were up at 4, I think, to pack up the last of our things, eat a bowl of frosties, and catch the cab to the station. After we finally got on the train, we fell asleep. In Paris, we got on the Metro to the hotel and dropped off our bags, but couldn't check in because it was about 10 AM. We had the first of our delicious breakfasts in Paris - crepes on the street! YUM! 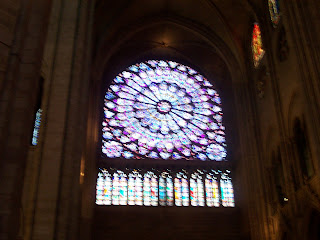 We walked across the Seine to Notre Dame. It was very beautiful and full of tourists, which might explain why this picture is so bad. 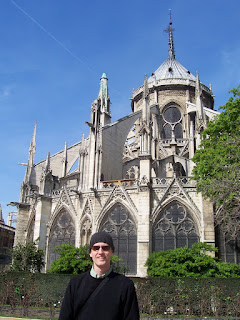 Look at that architecture! And the cute boy in the handknit hat. 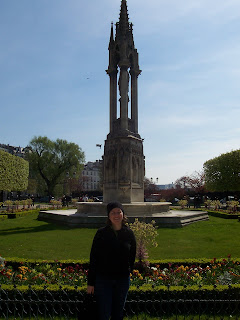 This pretty little park is behind Notre Dame. I look rumpled because I had been in a train all morning. After Notre Dame, we tried to go tour Saint Chapelle (more on it later), but they closed for lunch, so we checked in at the hotel, cleaned up, and then had a small lunch sitting on the street outside a cafe. We saw a lot of the big landmarks this first day, because then we walked down the Champs Elysees, looked in the stores, and saw the Arc D'Triomphe, which is not terribly impressive to be honest. 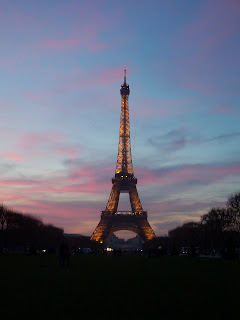 Then, the Eiffel Tower. The lines were way to long for us to seriously consider going up in it, so we found a park bench instead. And that is when something horrible happened.

A pigeon pooped all over me. Quite unpleasant, especially when the guys on the next bench were laughing themselves silly about it. (Although they were nice enough to point out that it was in my hair and not just on my shoulder. We hadn't noticed that.) It was a mess, but I finally got cleaned up in the bathroom of the cafe where we had dinner. Matt did his best to make light of the situation, explaining that the pigeon was named Jacques Pipoo, and that he was merely trying to ruin my jacket so that I could get a more fashionable French one. (I didn't.) 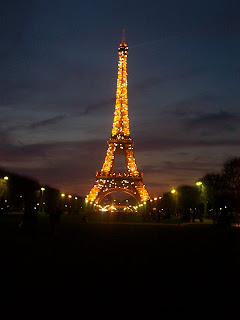 After dinner, we returned to the green behind the Eiffel Tower, avoiding trees all the way. We waited, freezing, me jacketless, Matt sweaterless, since I had taken his sweater to combat my jacketlessness. It was worth it, though, for this! Our guidebook called it the "electric shimmy." Every hour for 10 minutes. Nice.
Posted by Mo at 7:39 PM No comments:

I'm so happy today. The quiet kind of happy, just knowing that things are good in my world and I am blessed.

Today is my Matt's birthday. I'm incredibly grateful that God put him in this world and in my life as my partner and my best friend. He is a good guy to go to with a problem and he's really funny with his goofy songs and silly faces. I respect him for wanting to teach and for making a living as a musician. His desire to do something about poverty and to make a difference beyond the U.S. inspires me.

We're celebrating in a low key way - I'm making dinner at home and then...then...we don't HAVE to do ANYTHING this weekend. Well, fulfill some duties at church on Sunday, but that's fun. I am so sleeping in!
Posted by Mo at 1:56 PM 2 comments:

Wednesday in London - and Oxford

Since Matt and I both have fondness and appreciation for the writings of C.S. Lewis, and since Matt has fondness and appreciation for The Lord of the Rings by J.R.R. Tolkien, we decided a trip to London wasn't complete without also visiting Oxford, where both those men worked and wrote. (And it was supposed to be pretty - and we know other important people went there too, although I can't think of any right now.)

Anyway, after a very filling breakfast at our hotel (frosties cereal, fried ham, cooked tomatoes, toast, and tea), we went to Paddington Station, where we caught the train to Oxford. 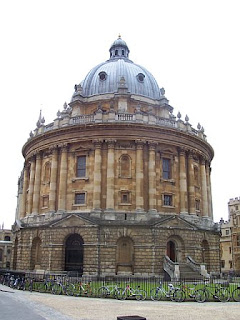 Radcliffe Camera (I don't know why the building is called a camera. We weren't allowed to go in because students were there or something.) 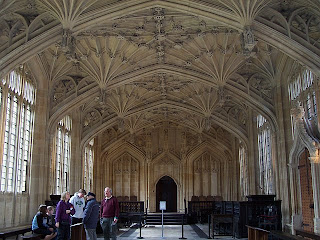 The Divinity School - it's not really the divinity school anymore, but it was pretty and very old (built in the 1400s). It also served as the hospital wing in some of the Harry Potter films. 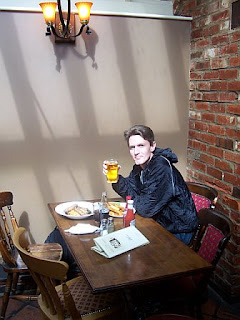 We had fish and chips and bangers and mash at the pub where the "Inklings" used to meet to grab a pint and talk, particularly about literature. 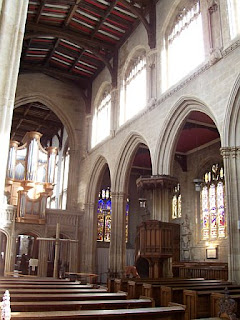 We visited the Church of St. Mary the Virgin where C.S. Lewis preached the sermon "The Weight of Glory." 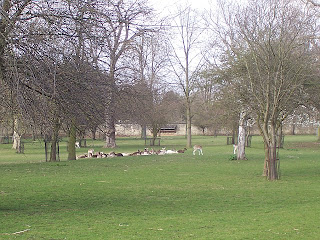 The grounds of Magdalen College were beautiful. This is the deer park. Can you see the deer? It was fenced off, but so pretty.

There was a problem with the train back to London that evening, so it took forever to get back. We were so hungry we almost gave in and grabbed dinner at a McDonald's, but we found a fun carry-out pizza place instead.
Posted by Mo at 12:17 PM 1 comment: