Happy, happy birthday to my dearest dad.
Posted by Mo at 1:03 PM 1 comment:

The Penderwicks - my favorite book of the last few years

I managed to do a lot of reading while enjoying my vacation last week. I was so enamored with one - The Penderwicks: A Summer Tale of Four Sisters, Two Rabbits, and a Very Interesting Boy by Jeanne Birdsall- that I read it in less than 24 hours. It's a National Book Award winner, so you know it's good. The subtitle tells you enough of the plot, so I'll just say it's magical. And wholesome. And funny, funny, funny! Recommended for kids and grown-ups.

I finished another book too - Uglies by Scott Westerfeld. I liked it too, although sometimes the descriptions were clunky. Very intriguing storyline about a distopian future where everyone is surgically modified to be beautiful at the age of 16. Tally, our herione, is smart and strong and undergoes a convincing change from desiring to be pretty and pleasure-seeking to fighting against the evil forces running her city. This book has been wildly popular at a couple of my libraries and there's a sequel I'll have to read soon.
Posted by Mo at 12:48 PM 1 comment:

Springtime resurrection reminders in our yard - 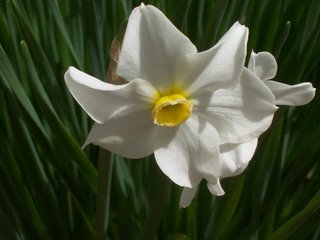 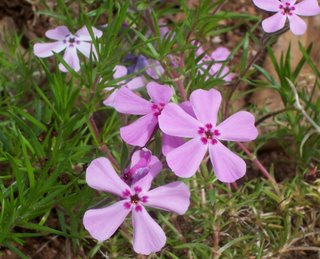 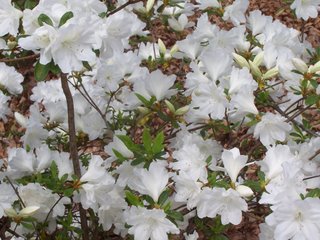 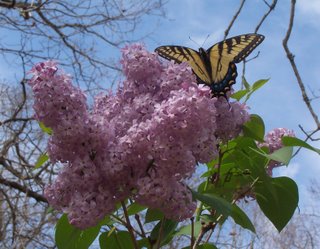 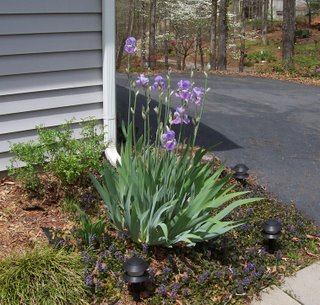 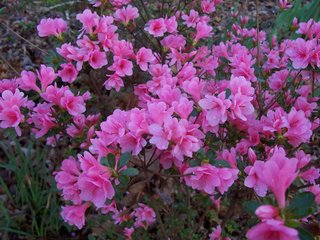 A lousy excuse for a stereotypical librarian...

There are some very obvious ways I am unlike the stereotypical librarian. First, my hair is too short to put in a bun. Second, I only say "shh!" during storytime and I'm trying to settle the little guys are the completely awesome carefully chosen book I'm reading. Third, I don't just read and shelve books all day. In fact, I don't know any librarians who just read and shelve books all day. There's too much to do to have any time to read (except for books I'm previewing to use in storytimre or a program/presentation - and those are usually picture books) and I only shelve books that I have taken off the shelves (we have library assistants who shelve regularly).

But you'd think I'd be able to make more time to read outside of work. I haven't been very good at it this year. This is something I'm trying to change. In about two hours yesterday, I finished An Order of Amelie, Hold the Fries by Nina Schindler. It's was a very light read about a 17 year old guy who strikes up a correspondence with a girl he's never met, a girl who is two years older, busy with a burgeoning career, and almost engaged to a long-time boyfriend. Will their love be strong enough to overcome their differences? In the end, the readers have to decide for themselves. But this is clever, told exclusively in e-mails, notes, text messages, etc. with great graphics.
Posted by Mo at 12:25 PM 1 comment:

Yes, Officer, I AM breaking into my own house...

The weather has been beautiful lately. We've been doing a lot of yardwork, even though our neighbors probably can't tell yet. We just planted several new plants and we're trying to plan out the beds that still need attention (which is, well, all of them), but new plants keep popping up. Who knew we had so much pretty phlox? Or tulips? Or those wacky purple flowers that are blooming by the a/c unit?

So I went outside this afternoon to take some pictures of the plant beds so we would know where everything is next time we want to plant something. On my way out the front door, I noticed (to my dismay) that it was unlocked and apparently had been since yesterday evening when Matt and I went outside. So I locked it.

That's right. I locked it.

Was I carrying my keys? No.

Was the garage door open? NO.

Was the back door unlocked? NO!

You'd be proud because I stayed calm. I could go ask my neighbors to use their phone, after explaining, that yes, I am pretty dumb. Matt's in Philadelphia for a conference so he really couldn't help me. My parents have an extra key, but they live three hours away. And we do have a hidden key, but it's hidden so well, I couldn't get to it. (We'll change it's location now - trust me!)

Then I noticed that the living room window was open - my saving grace! Thankfully I had opened it for Rainey when I got home because the weather was so nice. All I had to do was pop up the triangular pieces of metal that hold the screen in the window frame. So I wiggled and I jiggled and I scavenged for tools: 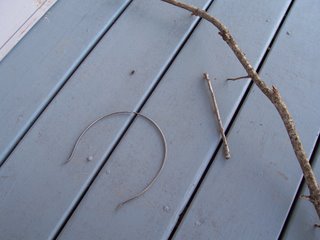 That's my headband, a big stick, and a little stick. In the end, my finger did the trick and I just had to climb in, and then replace the screen.

And yes, I actually did get the pictures of the yard.
Posted by Mo at 6:22 PM No comments: